Abstract Musings is a weblog started in 2004 by Robby Edwards. This is its fifth iteration, having been published on Blogger originally, then self-hosted first with Movable Type, and later with WordPress. Recently, it was moved to Posterous. This site is now a static site generated by Octopress, which is likely its final version. 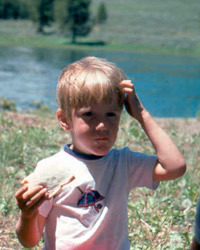 Abstract Musings is written by Robby Edwards, a web developer at Oak Ridge Associated Universities. Prior to that, he spent a little over two years with Bluegill Creative, a creative marketing firm in Knoxville, TN. And before Bluegill, he spent 12 years, mostly as a programmer, with the University of Tennessee. In his spare time, he enjoys photography, hiking, and generally, any outdoor activity. Whenever possible, he likes to travel with his wife and two daughters.